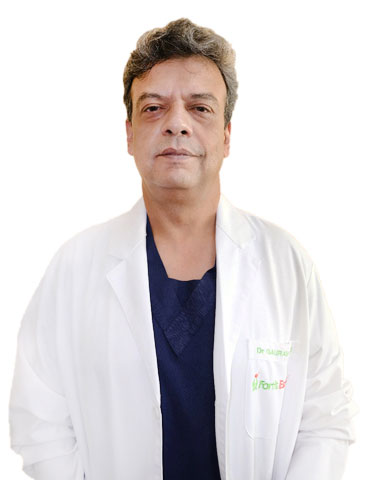 Dr. Gaurav Kumar is a Director – Paediatric Cardiac Surgery at Fortis Escorts Heart Institute, New Delhi and has spent a large part of his professional career treating congenital heart disease and contributing to the progress of congenital heart surgery in India. In a career of over 20 years he has performed over 5000 open heart surgeries in newborn, babies and grown ups with congenital heart defects. He specialises in treatment of complex congenital heart disease and has performed operations in babies like arterial switch operation, double switch operation, total anomalous pulmonary venous connection, arch repair, ASD VSD repair, tetralogy of Fallotrepair, truncus arteriosus repair, Rastelli operation and Cone repair and cardiac transplant.

Dr Gaurav Kumar is a graduate from Armed Forces Medical College and served a distinguished career in the Indian Army. He graduated with multiple medals in his graduation, Pune University silver medal during his post graduation in general surgery and CS Sadasivam national gold medal in Cardiac surgery. He established the pediatric cardiac surgery centres at Armed Forces Medical College, Pune and Army Hospital Research and Referral in New Delhi. For his outstanding contribution to development of paediatric Cardiac Surgery in Indian Armed Forces he was awarded the Vishisht Seva Medal by the President of India. He was one of the key members in developing the cardiac transplant programme at the Army Hospital Research and Referral, New Delhi.

He has more than 30 national and international publication in reputed journal as is devoted to research for furtherance of pediatric cardiac surgery In the country.

DNB CTVS – National Board of Examinations

Over 50 publications and papers presented at various national and international conferences. Medical Breakthrough/Innovation to use and report new drug(Ivabradine) in post congenital cardiac surgery Junctional Ectopic Tachycardia in infants and children.