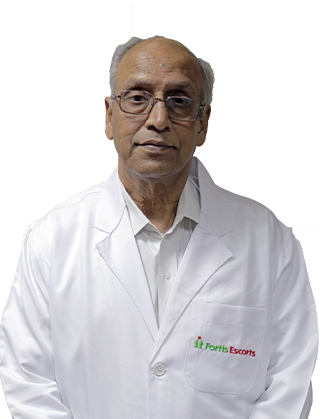 Dr. Subrat Kumar Acharya is an Executive Director – Gastroenterology and Hepatology in Fortis Escorts Hospital, Okla, New Delhi (INDIA). He is a renowned gastroenterologist and liver transplant physician, with distinguished career spans more than 4 decades at the prestigious AIIMS, New Delhi from 2004-16 and has retired as Professor and Head, Department of Gastroenterology. His Areas of expertise include all areas of gastroenterology and liver diseases including transplant hepatology and advanced endoscopy. For his achievements and contributions to the field of gastroenterology and hepatology, Dr. Subrat Kumar has been honored with several awards and accolades. Prominent among them is the Padma Shree which he received in 2014. Dr. Subrat Kumar Acharya has also received the prestigious Samanta Candrasekhar and JC Bose Awards, Mitra Olympus Endoscopy Award, P N Berry Award, Commonwealth Medical Fellowship Award, Om Prakash Memorial Award and Best Young Investigator Award by Asia-Pacific Association for Study of the Liver.

Dr. Subrat Kumar Acharya obtained his MBBS from the MKCG Medical College, Berhampur University, Orissa with honours in Pathology, Opthamology , Otto-rhino- laryngology in 1974 and was adjudged as the best outgoing student .He did his MD (General Medicine,1980) from Utkal University, Orissa and DM(Gastroenterology, 1982) from the All India Institute of Medical Sciences(AIIMS), New Delhi. He joined the AIIMS , New Delhi as a lecturer in 1986 and became a Professor in 1997 and was working as the Head of the department of Gastroenterology at the AIIMS since 2004 till his super annuation on 31st October 2016. He was the Dean(Research),AIIMS, New Delhi from January 2015 till October 2016. After superannuation from AIIMS on October 2016 ,he is working as the Dean (Research),Fortis Hospitals Pro Chancellor of KIIT University, Bhubaneswar and as Emeritus Professor at AIIMS, New Delhi & Dean(Research) for Fortis group of hospital ,India. He continues to be the J C Bose Fellow of Department of Science & Technology, Govt of India. He has been appointed as the president of the AIIMS, Bhubaneswar from November 2018. He also has been serving as the Chairman, Academic Committee of the AIIMS, Jodhpur since 2015

Dr. Acharya has special research interest in Liver diseases, particularly in the area of Acute liver Failure, Acute on Chronic liver Failure, Primary liver Cancer, Hepatitis E virus infection , Hepatitis A,B &C Virus infections. He has published about 300 research papers in Indexed international and national journal of repute, some of which provided new knowledge in the particular areas. He has written about 50 invited editorial ,reviews, commentary in such journals and also wrote more than 50 chapters in various text books in Gastroenterology & Medicine. Over the years multiple editorials were written in various international journals on his original research His work on Acute liver failure has resulted in identification of new definition, classification, etiology, natural course, prognostic factors, the pathogenetic factors and the therapeutic approach of treatment of Acute liver failure as distinct from the west . Based on his work International Association for the study of liver suggested holistic definitions and nomenclature for Acute and sub-acute liver failure. Due to such contributions, Indian Council of Medical Research granted him to establish ‘Advanced Center for Liver Disease ‘ at the AIIMS. He ,further worked on Primary liver cancer and established cheaper therapy and provided the guideline for therapy in liver cancer in India. He also was associated with development of vaccination policy for HBV and HAV in India. He also obtained the patent for developing antibody the hepatitis B Surface Antigen(Anti-HBs). He has trained 113 Gastroenterologist and PhD fellows.

Contributions to Medical Journals & Other Institutions:

Dr. Acharya is the Editor in Chief of ‘Tropical Gastroenterology’ an indexed and the highest cited journal in Gastroenterology from India. He also served as the Editor of Journal of Gastroenterology & hepatology from 2006 -2009 which is the official journal of the Asian Pacific Association of Gastroenterology. He was an Associate Editor to Liver International from 2012-2014.He remains to be in editorial board of many Gastroenterology and hepatology journals. He served as the Adviser to Armed Forces Medical Services on research and worked as an consultant to International Atomic Energy Agency to develop radio-isotopic treatment modalities for treatment of Primary liver Cancer . Dr Acharya is at present is the Chairperson of Academic Committee & member of the Governing body of the AIIMS, Jodhpur and the Governing body member of the VSS Medical College, Burla. He is also the member of the Science Engineering Review Board(SERB), Department Science & Technology, Govt of India. He has been also appointed as the Dean (Research) for the Fortis health Care group for India. He has assisted ICMR in many PRC . AIIMS ,New Delhi has appointed him as the life long Emeritus professor in Gastroenterology.

Fellow of American College of Physicians (2008).

– Indian Association for the study of liver

– Selected member of International Association for the study of liver (IASL)

c. President - Indian National Association for the Study of Liver in 2002-2004

m. Organising Secretary of the APDW 2008 (Asian Pacific Digestive Week 2008 –The annual conference of Asian pacific Association of         Gastroenterology and Hepatology)- held at Delhi from 13th to 16th September 2008 at Ashoka Hotel Delhi