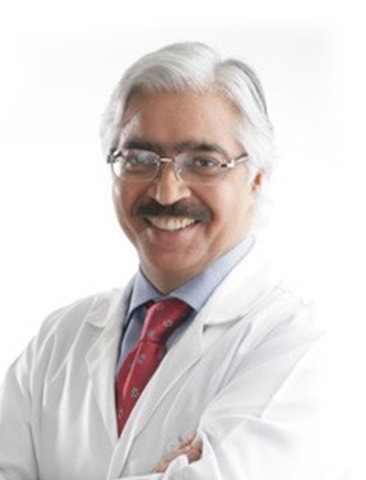 Dr. Ashok Seth is the current Chairman of Fortis Escorts Heart Institute, New Delhi and Head, Cardiology Council of Fortis Group of Hospitals. His contributions in the field of Cardiology, especially Interventional Cardiology have been recognised extensively in India as well as across the world. During his career span of 30-years, he has pioneered numerous angioplasty techniques Directional Atherectomy, Angioscopy, Stents, Thrombectomy devices and Drug Eluting Stents, use of Impella heart support device failing heart, Bioabsorbable Stents and TAVI and implemented it successfully both in India and other regions in Asia Pacific. He has performed one of the highest number of angiographies and angioplasties which has been mentioned in the 'LIMCA Book of Records'.

He has been a part of the Focused Advisory Group and seminal studies for development and clinical applicability of Bioresorbable Scaffold (BRS) Stent which is highly recognised technique worldwide.

For his unique achievements & contributions he has been honoured with the prestigious National Honour of "Padma Bhushan" and "Padma Shri" Award by the President of India in 2015 and 2003 respectively, the National Award of Republic of Spain "Officer's Cross Order of Isabella the Catholic" in 2010, 'Mason Sones Award' from SCAI (USA) in 2010 and numerous other awards.

Dr. Seth has been the President of the Cardiological Society of India and Vice President of the Asian Pacific Society of Cardiology. He was elected Board of Trustee of SCAI (USA) for the period 2007-2010 and is presently a member of the SCAI Nominating Committee and Voting Selector of the MSCAI Nominating Committee. He has been invited to lecture on and demonstrate complex angioplasty techniques in more than 400 international training courses and meetings across the globe including live transmissions of complex cases from India to the TCT and EuroPCR Meetings. He is on the Editorial Board of JACC Cardiovascular Interventions, CCI, Euro Intervention, Indian Heart Journal and others.

He has been honoured by Doctorate from four prestigious Universities in India. He has more than 250 publications to his credit in prestigious Indian and International medical journals, written and edited chapters in 10 text books of Cardiology and Medicine & edited two books in Cardiology. He has trained more than 350 cardiologists from India and abroad in advance techniques of angioplasty.