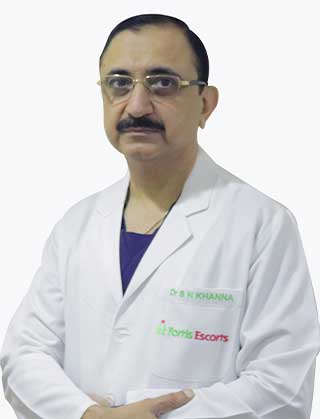 Dr. Surendra Nath Khanna is an Director, Department of Cardiovascular Surgery, Fortis Escorts Heart Institute, New Delhi, India. He specialises in all types of adult cardiac surgical work. He is one of the leading and most experienced cardiac surgeon with expertise in Beating Heart Surgeries, Cardiac Valvular Surgery--Mitral Valve, Aortic Valve, Tricuspid valve, Double Valve Replacements and Redo-valve surgeries. He also has special interest in Valve Repairs, Minimally Invasive Cardiac Surgery, Aortic Aneurysm Surgery and Heart-Failure Surgery. He has relentless quest to bring the best in cardiac surgery to India and within the reach of common man.

He is a Graduate of King George's Medical College, Lucknow. After completing his MS (Gen. Surgery) he was trained in cardiac surgery at King Edward Memorial Hospital, Mumbai; Christian Medical College, Vellore. Thereafter he went abroad and was trained under Prof. Ottavio Alfieri, internationally known for his pioneering work in heart valve techniques.

Dr. Surendra Nath Khanna has been practicing cardiac surgery since the last 26 years. He has carried out more than 17,000 cardiac surgeries. He has been working as Consultant cardiac surgeon at various prestigious hospitals which includes San Raffaele Hospital, Milan, Italy; where he was trained under Prof. Ottavio Alfieri, internationally reknowned for his pioneering techniques in valve repairs and valve surgery in severe left ventricular dysfunction. He has worked with Luminaries like Prof Stanley John. His work experience encompasses operating at prestigious centres which include-King Edward Memorial Hospital, Mumbai; Christian Medical College, Vellore; Max Heart and research Institute, New Delhi and Fortis Escorts Heart Institute New Delhi.

He is passionately involved in the Community Outreach Services and creating mass awareness toward cardiac diseases for last 26 years. He has been regularly reaching out to the masses of India, a fact which has been widely acknowledged by media and society at large. He has rendered free cardiac care in far and remote areas on North India.

His experience in cardiac surgery amalgamated with quest to train junior cardiac surgeon in India. Dr. Khanna has trained many cardiac surgeons from various parts of India and is actively involved in training the undergraduate and post-graduate students. He also has a keen interest in academic and research work, which includes publications in various reputed international journals. He has been invited as speaker on many international forums.

Invited as a speaker, panelist & chairperson in various conferences