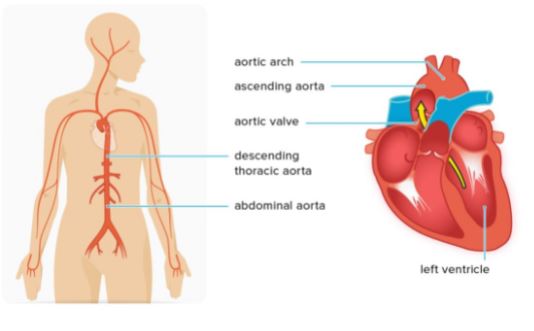 Thoracic aortic dissection usually occurs due to structural problems in the wall of this vessel. Didactically we can separate them into two groups:

Other less frequent situations, but that can also be triggers for aortic dissection, are pregnancy, trauma, and the use of illicit drugs, especially cocaine.

The most common symptom in the acute phase is severe chest pain. Some patients report having the distinctive sensation of something breaking or tearing within them.

The main differential diagnosis is acute myocardial infarction. Other mild chest pains, such as muscle pain or dyspeptic seizures (gastritis), can also be considered.

Pain in the neck, back, or abdomen may also be reported.

Initial treatment consists of stabilizing the patient's blood pressure, sometimes with intravenous therapy and rapid reconstructive surgery if a risk of cardiac tamponade or organ system ischemia is identified.

When the initial portion of the ascending aorta is affected, close to the outlet of the heart, it is usually necessary to perform open surgery, opening the sternum, and change the diseased portion of the aorta for a Dacron prosthesis.

Most ischemic organ correction techniques and interventions in other portions of the Aorta now receive full endovascular therapy, with less patient morbidity and faster recovery.

Types of Surgery for Aortic Dissection :

In this surgery the diseased aorta and the valve will be replaced with a new aorta (made of special cloth called Dacron) and a valve made together into a tube called “valve conduit”. This operation gives very satisfactory long term outcome. Sometimes , the operation also removes part of the arteries that supply the brain and in rare cases , this is combined with placement of a stent to cover the rupture of aorta lying in the chest or the abdomen. In these cases , surgeon uses some hybrid graft called “Thoraflex”.

Illustrated Bentall Operation – A. Large swelling in aorta called Aneurysm
B. Diseased part of the aorta removed with the valve
C. Aorta replaced with a cloth tube called the Dacron tube and attached to the valve
D. Completed operation with attached coronary arteries